The Cork and Dublin offices of Roberts Nathan will close for the festive season from close of business on Wednesday, 23rd December, reopening on Monday, 4th January 2021. We will continue to be available to clients who need our services during this time, please contact your Relationship Manager or Partner at Roberts Nathan for assistance when required. Wishing you and yours a safe and peaceful Christmas and looking forward to working with you in 2021.
Audit

As we close out on 2020, we have produced a podcast where we take a look at the year that was, and provide our view on what businesses might expect in 2021. Aidan Scollard, Brendan Kean and Derek Dervan, partners with Roberts Nathan discuss three main areas likely to impact Irish businesses as well as some tips when planning for 2021:
1. The implications of the Covid vaccine on Irish businesses. Cashflow and succession planning have become very important for business owners, however some good has come from Covid in terms of the opportunities it has created for doing business in a new way. It may also bring about potential M&A and real estate activity, and possible increased consumer spending in the year ahead.
2. Brexit and planning around UK businesses setting up operations in Ireland.
3. Budget 2021 Capital Acquisition and Gains taxes, Entrepreneurial Relief, Pensions and Retirement Relief. 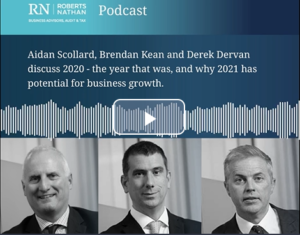 We hope you enjoy listening to our podcast and if you have any questions regarding any of the points raised please let us know.

Roberts Nathan has announced Eilish Haughton as a key senior appointment to provide and oversee audit and advisory services for entrepreneurial led and SME companies in Ireland and the UK. Eilish Haughton is an experienced accountant with over 18 years’ experience gained in two of the top six accountancy firms in Ireland. Eilish is a Business Studies and Accountancy graduate of TU Dublin and a Chartered Accountant. Welcoming Eilish to her new role, Brendan Kean, Dublin Managing Partner said: "I am delighted Eilish has joined us, not only will she bring very strong functional experience to enhance further our audit and advisory services, but her addition will also grow our capabilities as a key full-service accountancy firm supporting Irish business and entrepreneurs.” Eilish Haughton added, “Providing an attentive client service, combined with a strong reputation for excellence is what is different about Roberts Nathan – I’m very excited to join the team here and look forward to us delivering on our ambitious plans and building life-long partnerships with our clients.” Established in 1997, Roberts Nathan has grown significantly since inception. With offices in both Dublin and Cork the firm has grown to become one of the most trusted professional practices in Ireland with a team of more than 50 professionals. Pictured (Pre-Covid) L/R: Eilish Haughton, Audit Director; Brendan Kean, Dublin Managing Partner; Aidan Scollard, Partner; Derek Dervan, Partner.
News

On Tuesday 13th October, Finance Minister Pascal Donohoe announced an unprecedented 2021 Budget package investing €17.75 billion in the economy. The Budget was focused on investment and helping businesses impacted by Covid-19. We have prepared a brief summary of the 2021 Budget highlighting some of the key changes outlined by the Minister. Click on the link below to read. Budget 2021 Highlights
News

Over the past few decades Ireland has become a destination of choice for Foreign Direct Investment (FDI).  The announcement this week by Apple to invest €850 million in the development of a new data centre in Co. Galway is further evidence that Ireland remains one of the top European destinations for FDI. The investment by Apple in a new data centre is expected to create over 300 jobs during each of the phases from construction to operation, with an expected 100 to be created once the centre is fully operational.  In recent years other companies such as Ericsson, Microsoft and Google have all invested their data capabilities in Ireland as our predictable climate and temperatures allow such companies to minimise the cost of cooling the vast level of equipment stored in the data centres.

Apple’s €850 Million investment is not the only good news for FDI into Ireland.  In recent months the World Bank’s “Doing Business 2015” report placed Ireland 13th out of 189 countries for ease of doing business, which is a jump of four places on last year.  In addition to this, the report indicates that Ireland has ranked as 5th for ease of trading across borders and 6th for ease of paying taxes and protecting minority investors. When reviewing Irelands ranking for ease of paying taxes with comparator economies such as Canada, United Kingdom or New Zealand Ireland’s ranking increases to 1st  place.

A recent briefing issued by IDA Ireland shows that there were 197 investments during 2014 which is an increase of 20% on the prior year.  Of these investments 88 came from new name investors.  Some other key indicators from the IDA briefing are as follows:

Why FDI continues to grow for Ireland

As outlined above, Ireland has been a destination of choice for FDI for many years.  This fact is further substantiated by the FDI Intelligence Report for 2014 which reports that Ireland was the only country within the European top 10 to record a growth in FDI project numbers.  Given Ireland’s size and population securing FDI of €4.2bn is a strong result, especially when compared to FDI of €6.6bn secured by France. The principle source of FDI for Ireland is from the US, with investment of more than US$165bn.  This level of investment by the US reflects higher than the total invested in the BRIC (Brazil, Russia, India and China) combined. So why does Ireland attract such levels of FDI?  When we considered this question we identified a number of factors which contribute to Ireland’s attractiveness as a place to do business within the global market.  Some of these factors include the following: While each of the above are significant factors in attracting FDI to Ireland the factor which has received most attention in recent months is the 12.5% Corporation Tax Rate.  While there has been much debate surrounding Irelands Corporation Tax Rate, the Minister for Finance made it very clear in his Budget 2015 speech that the rate will remain unchanged when he announced that: “The 12.5% tax rate never has been and never will be up for discussion. The 12.5% tax rate is settled policy. It will not change.”

The Future for FDI in Ireland

The recent announcement by Apple is a positive indicator that Ireland will continue to attract FDI in future years.  To ensure the continued growth in FDI into Ireland it is important that Ireland continues to develop each of their strengths from providing a skilled labour force to ensuring ease of doing business for those investing in Ireland.  As part of Ireland’s strategy it is vital that our Government acts on the announcements they made in Budget 2015 in relation to a “Roadmap for Irelands Tax Competitiveness”, which included plans for the implementation of a “Knowledge Development Box”. Ireland saw the beginning of its recovery during 2014 and it is expected that such recovery will continue through 2015.  FDI will play a significant role in Ireland’s recovery which is why it is important for our Government and State bodies, such as the IDA, to ensure our FDI offering is the most competitive within the market and is therefore capable of attracting and retaining significant FDI.    Images: Shutterstock
News

The Partners at Roberts Nathan (incorporating Malone Power & Company) invite you to join them for a breakfast seminar on Thursday 16th October 2014. At the seminar we will provide you with specialist tax and legal advice on what you need to consider when planning  your retirement/passing on your business. We will also provide you with valuable advice on pension planning and how best to structure your finances for your retirement. For more details please click here: Forward Planning Seminar   Images: Shutterstock
News

Roberts Nathan Merger Leads to a Nationwide and International Expansion

In recent months we have announced our merger with Malone Power & Company which has been part of our strategic move to expand both our national and international practice.  This merger has seen us opening our new headquarters at the IFSC in Dublin and expands our broad range of audit, consulting, financial advisory and tax services to both our national and international clients.   Roberts Nathan was founded in Cork in 1997 and is already established as one of the leading accountancy practices in the southern region, providing professional services to both and Irish and international client base.  We will continue to operate our Cork office and our ambition is to maintain the high quality of service which has been the foundation of our rapid growth and expansion.   As part of our expansion we are delighted to announce the appointment of Brendan Kean as a new partner to our Dublin Office.  Brendan joins us from RSM Farrell Grant Sparks, where he was Audit Manager.  Brendan brings a wealth of experience in the charity sector to our firm and will head up our Dublin office.   We pride ourselves on being a progressive firm and this merger will enable us to provide a nationwide service and maintain our growth and expansion into international markets.  Further expansion is expected for the remainder of 2014 as we are planning to increase our staffing levels to 35 accountants before the end of the year.   We as a firm have built a reputation for offering a high quality, highly efficient and personal service as we advise and provide our clients and business partners with the support to grow and meet the many challenges that operating a successful business entails.  We have a broad client base comprising branches of overseas and international clients, small to medium sized companies and owner managed businesses.
This website uses cookies to improve your experience. We'll assume you're ok with this, but you can opt-out if you wish. Cookie settingsACCEPT
Privacy & Cookies Policy

Any cookies that may not be particularly necessary for the website to function and is used specifically to collect user personal data via analytics, ads, other embedded contents are termed as non-necessary cookies. It is mandatory to procure user consent prior to running these cookies on your website.